Who knew back in October 2013, when we released Dubfreq‘s FKOFd001, that we’d still be here eight years later with three imprints under the FKOF Records banner?

It’s been an experience, that’s for sure, and one we’re looking forward to continuing long into the future. We celebrated FKOF’s first decade in 2020, and in 2021 we mark our 50th release on FKOFd. As we’re wont to do, we’ve invited a few friends to help us mark the occasion. 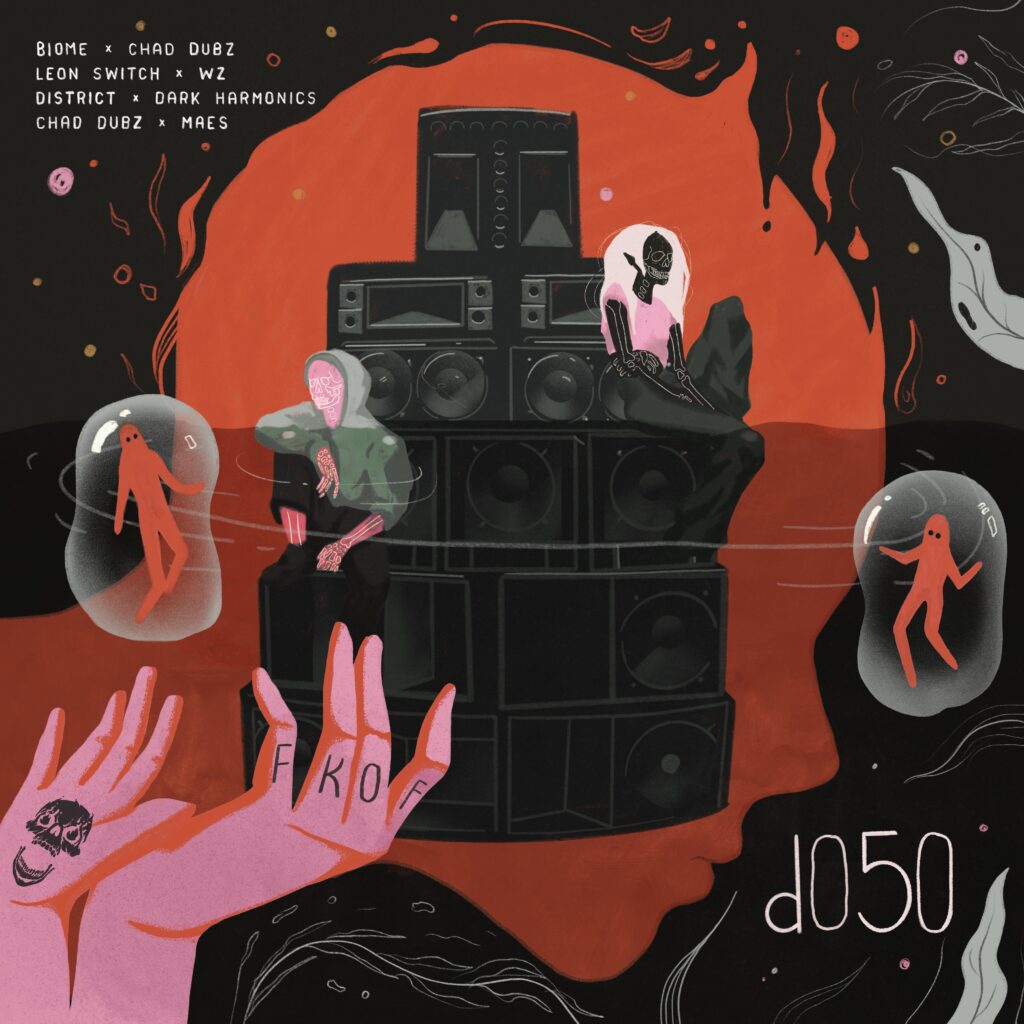 FKOFv001 (and then FKOF10) saw us test something we’d not done before: bringing artists together to rework each others’ material for the first time. We’ve done similar with our fiftieth EP, and our sixth vinyl release (but more on that in a future update), and it’s done wonders in reframing music from our back catalogue. The concept for FKOFd050 was relatively simple: remixing tunes we’ve only ever released on vinyl. We brought in artists we’ve released stuff from previously and we’re pretty stoked on how things have come together.

FKOFd050 starts with District‘s brooding rework of Dark Harmonics‘ F#cking Spiders from FKOFv002. It’s a savagely clean reimagining of the tune and it’ll be an experience the first time it gets played on a system. Next up, we’ve Chad Dubz‘s remix of Maes‘s Jah, Jah Livin from FKOF10. The original was a proper stepper before Chad got his hands on it, and he’s done what we’d hoped on his version. Lovely stuff. The third track on the EP is a first for FKOF, welcoming half of the production duo (partly) responsible for cementing our love of 140 back in the day. It’s an absolute honour to have Leon Switch on FKOF Records and his remix of FKOFv003‘s Dossier from FKOF fam WZ is perfection. A percy. Last, but definitely not least, we close off the EP with an explosive effort from the man like Biome: with Paddy reworking Chad Dubz’s wild Nilaari from their collab vinyl release FKOFv004. Hold tight on this one, it goes off!

It’s been an incredible eight years supporting the 140 sound, and an honour to be given the opportunity to be guardians of such amazing material from the producers we’ve worked with since FKOFd001. As ever, the continuing success of what we can do is down to you guys and girls; everyone supporting the releases and the artists we support. Thank you, and here’s to the next 50 releases!

FKOFd050 is available to pre-order from the FKOFd Bandcamp today, and will be available to purchase next Friday, 07/05/21. We’re trying something new, so the release then goes on Beatport a week after that, 14/05/21, and drops on general release (via our friends at Juno Download and all other good electronic retailers) two weeks later. You can find the release archive across all platforms (and our Bandcamp) while you’re at it.

Producers, if you’ve got tunes for us, please feel free to send them our way.