We’ve got big love for Villainous Visard here at FatKidOnFire HQ. Binz’s brand was the first to feature here at FKOF way back in March, Binz designed the FKOF logos and is generally an all round legend. We’ve had our eye on the brand’s successes for a while and thought it was time (now we’re back in the 21st century with an internet connection) to document said successes… 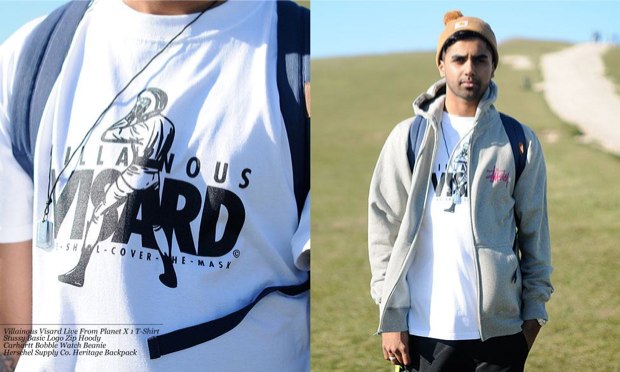 One of the UK’s finest streetwear stores dropped its A/W 2010 lookbook at the end of October (apologies for only featuring it now). Urban Industry have long been favourites of FKOF, mainly due to Dan and the rest of the family stocking the big brands you’d expect but still finding time to represent small independent brands. One such brand is Villainous Visard. The brand’s latest collection “Live from Planet X” made it onto UI and we were dead proud to see Binz’s hard work feature in UI’s amazing lookbook. Such a big look!

The lookbook features some seriously fresh styling and was shot by the hugely talented Sean from UI. It also features Chris from Elephanto (who featured here at FKOF a while ago) and DJ Odessa modelling the threads. Click through to see the full lookbook in all its glory – it’s amazing!

The second piece of awesome Villainous Visard news is the above video. “Game Over” is from Tinchy Stryder’s latest album “Third Strike” and features pretty much all the heavyweights in the UK grime scene. Standout verses come from Professor Green, Devlin and Example. The eagle-eyed amongst you will also notice Example rocking the “Astro-Villainy” tee! Such a good look for Villainous Visard. Props to Example and big up to Binz for getting the recognition he deserves!

If you’re liking what you’ve seen from the Villain catch Binz on Twitter and hit their webstore to get your cop on. Villainous Visard tees are some sick isht, if you don’t own any then get sorting that out asap!

If you have any thoughts on the success of Villainous Visard let us know either via the comments section below or through one of the other forms of contact (email, Twitter and Facebook).