Out and About (Fieldview Festival 2012)

A few weeks ago, I was offered a writing position for What’s On UK – below is my first (of hopefully many) contributions to the site. I’ll put this post up in full, but in future I’ll just publish an extract and the outbound link to the What’s On blog…

It’s been a good few years since I last ventured to a festival – I’ve spent far too long in the awesome (but sometimes dingy) clubs in and around London. I think the last festival I made it to was Leeds back in 2006, so when I was welcomed to the What’s On team and offered tickets to a festival I’d never heard of just outside Bristol a few weekends ago, I jumped at the opportunity. 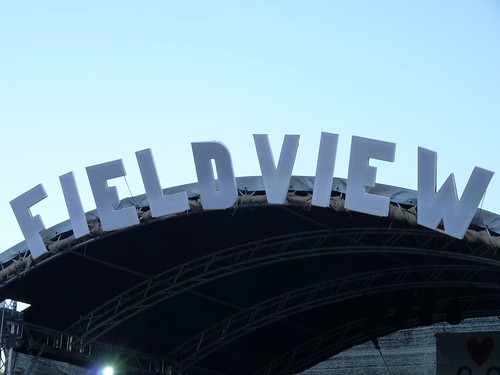 Fieldview Festival started life as a garden party on the Cameron brothers’ farm in 2007. Since then, its outgrown its humble surroundings and, this year, welcomed over 2,000 revelers to the new site in Little Somerford. Sticking to its grassroots background, Fieldview is very much an overgrown party. Well, to be honest, that’s exactly what it is – but given the overly corporate feel the bigger, more mainstream festivals have these days, Fieldview is an undiscovered rarity that nestles in a few fields in Wiltshire. 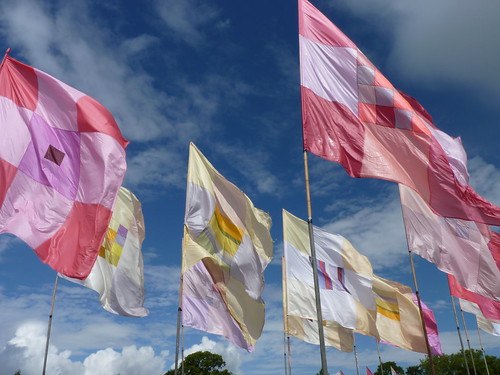 I could only make it down to the Saturday event, with work (and play) commitments meaning I had to miss out on the Thursday and Friday fun. Jumping in the car with a raincoat, some wellies and a rather sleepy girlfriend (armed with a charged up camera) early Saturday morning, we drove out of London and onto the M4. We pootled along for a couple of hours and ended up in the depths of rural England – with nothing but fields and hedgerows as far as the eye could see. We got to the festival site just before 10am, rather overestimating the time it’d take to make the trip on an early morning.

Everyone was either asleep or blearily heading for the food vans/ tents for some breakfast. As, it appeared, was Andy – our contact on the ground. Andy informed us, rather sleepily, he’d been up until 7am that morning sorting out the previous night’s headphone disco (that had ended around 5.30am). Given he met us at the gates at just before 10(!); we got what we needed from him, had a quick tour and let him get back to bed. Sorry for getting you up, dude! 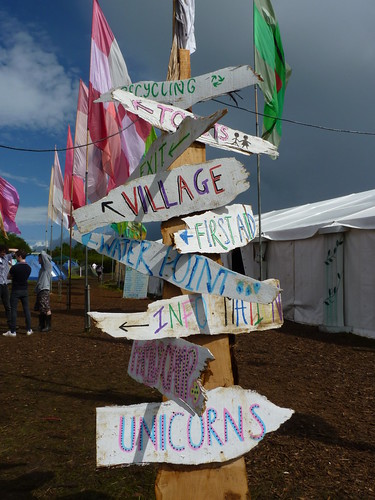 We got our passes and wandered through the gates; which were more of past a tractor, a few hay bales and under a sign welcoming us to The Village. Given the rather quiet nature of the festival, Andy got us acquainted with the festival site in a few minutes and left us to explore… 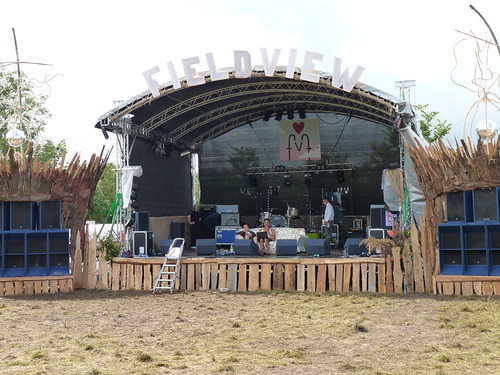 After wandering around the site and sampling the wonders of bubble tea (bizarre but delicious), we made our way to the main stage area where the majority of the food stalls (and the awesome Charlie’s Bar) were. The day was being opened by one of the Fieldcrew (festival volunteer) members armed with a laptop connected to the main stage’s sound system – skipping through a selection of tunes in his media library. 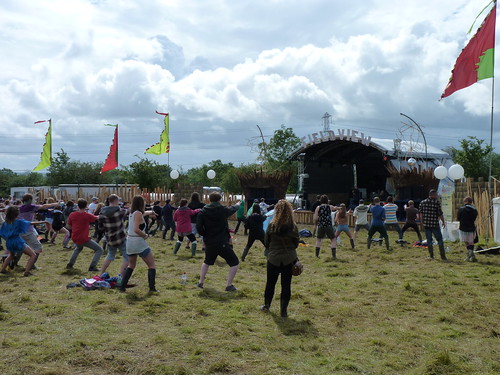 A gentle start to the day; a theme that was continued by a significant proportion of the attendees enjoying an hour or two of Tai Chi (a first for any festival I’ve every been to, but a lovely sight nonetheless). 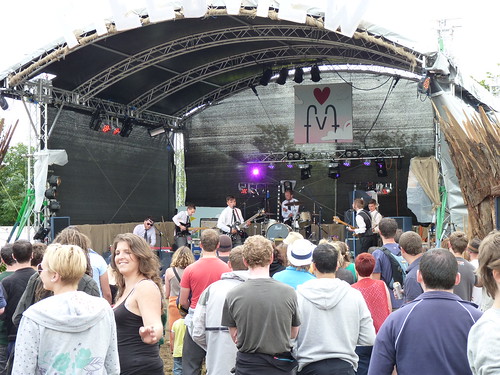 Once the Tai Chi had ended with “Namaste” echoing around the arena, the day’s first band took to the stage. Newcastle’s Dirty 6 enthusiastically tore their way through a selection of covers to get the crowd going – it took a while but they got there in the end. Sharp suits and a lot of fun! 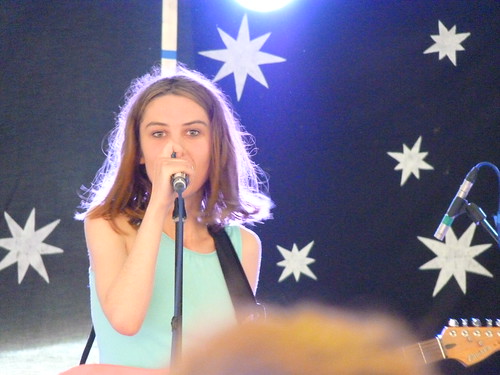 After enjoying Dirty 6 for a while, we then headed up to one of the tented stages to catch North London’s Wolf Alice. I’ve been hearing good things about these guys and they most certainly didn’t disappoint. Lead singer Ellie Roswell and the rest of the band are onto something. Go download their self-released 4 track EP on Bandcamp. Do it now! 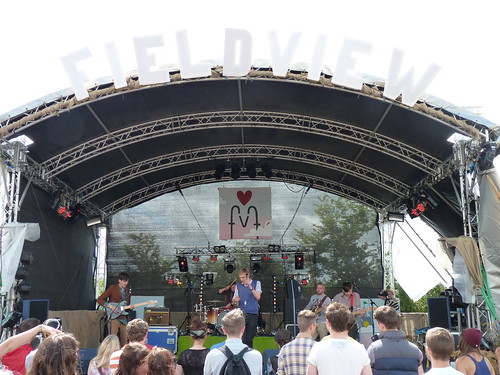 Recovering our thoughts after the rather brilliant Wolf Alice (can you tell we liked them?!) we headed back to the main stage to catch the next band playing there. It’s been a long time since an indie band really excited me, but Oxford’s Spring Offensive did that and much more. The five piece were superb – but don’t just take my word for it. Go listen to their uploads on SoundCloud or hit them up on their impending EU/ UK tour. Can’t recommend them enough!

We started getting a bit hungry(/bordering on starving) after a morning of listening to great music, so we had a look at what Fieldview had on offer in terms of food.

We started with some of the nicest chips I’ve had in a long time (with the nicest relish I’ve ever had – no mean feat) from the Wild Game Co. If you’re in London and looking for some meaty lunchtime goodness from the Highlands during the week, head over to Andy and Ru’s stall on Whitecross Street Market or find them on Broadway Market on Sundays.
After the chips and still a little peckish, we made our way over to what’s quite possibly the coolest foodie idea I’ve ever seen. A mobile, wood-burning pizza oven in the back of an old horse box courtesy of The Firebox Pizza Company. These guys were in high demand all day (and I mean all day, apparently they cooked nearly 1,000 pizzas in the three days they were on-site). If you’re in the South West and want to add something to your event, you’d do a lot worse than hire these guys. The pizzas were delicious! 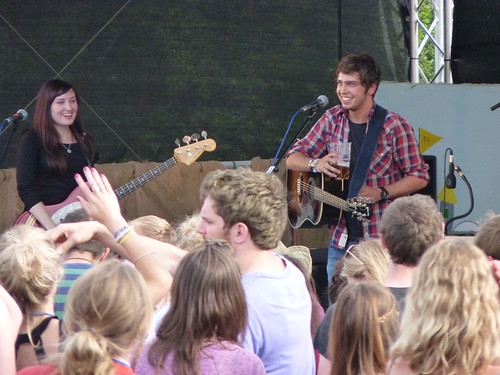 We stocked up on a bit more of the local cider on offer and managed to catch the end of the Fieldview Choir on the main stage before the afternoon’s festivities kicked off. Hot off recent collaborations with grime stars Wretch 32 and K Koke, Josh Kumra‘s set was pretty damn awesome. If you’ve not bought his latest single yet, go do so. Josh is going places fast! 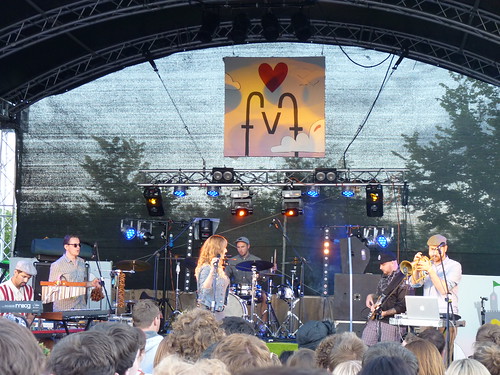 My personal highlight of the day was to finally catch Submotion Orchestra in such an idyllic live setting. Having blown the music world away with 2011’s debut, dubstep-infused album ‘Finest Hour‘, SubMo are currently gigging in the run up to the drop of their second album (which is expected later this year). If you’ve not heard of Submotion (where have you been?!), the BBC’s David Katz summarises them nicely:

“At the core of the group is noted producer/DJ Ruckspin and drummer Tommy Evans of Gentleman’s Dub Club. The supporting cast includes experimental jazz trumpeter Simon Beddoe, likeminded keyboardist Taz Modi (of Monkey See Monkey Do), salsa-fied percussionist Danny Templeman (who has worked with both Macy Gray and Andre Tanker), and London-based bassist Chris ‘Fatty’ Hargreaves. And the icing on the cake takes the form of vocalist Ruby Wood, whose sweet jazz and soul tones inject an aspect of melodic moodiness, despite often sounding at odds with the backing material.”

All in all, seeing Ruby and the guys was a perfect end to a rather perfect day. The rain held off, I had copious amounts of great cider (and even better pizza) and the music, atmosphere, crowd and team behind Fieldview Festival were brilliant. Andy and the rest of the FVF team, thanks for helping us out – I’ll definitely be back next year! 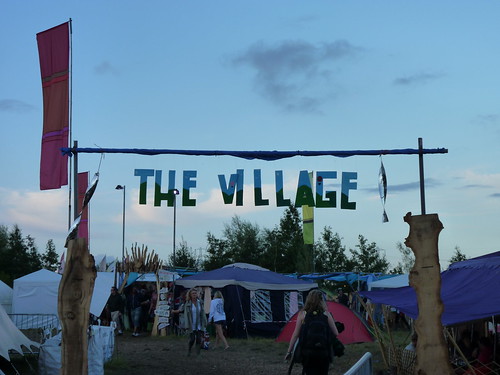 fatkidonfire, out and about, recap, submotion orchestra, what's on UK